Travelling To and From PEI

When the train system was completely abandoned in 1989, the idea was born to turn the railways into recreational trails. So today we have the Confederation Trail, a continuous multi-purpose path across the Province. Islanders and visitors alike enjoy the pastoral landscape while walking, jogging and cycling along the Trail. 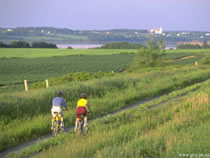 In the past, transportation between the mainland and PEI revolved around ferry systems and railways. Some significant events have considerably increased the speed of transportation to and from the Island:

Today, for travellers to or from PEI, there are several options:

There are identification requirements for air travel inside Canada. All passengers aged 12 and over are required to present one piece of valid government-issued photo ID showing their name, date of birth and gender.

The airport is about 10 minutes drive from downtown Charlottetown.

There are shuttle and bus services for travelling off the Island. A shuttle is a van used for transport of a smaller group of people. Shuttles travel daily to Halifax.

Vehicles Via the Confederation Bridge

The 13 kilometres long Confederation Bridge is the longest bridge in the world over ice-covered waters. The curved engineering masterpiece runs from Borden-Carleton in PEI to New Brunswick. Bridge tolls are for the round trip and are paid only when leaving PEI.

When choosing to leave or come to the Island by the bridge or the ferry, note that the bridge is the faster way, without schedules. The ferry charges a little more, but you are not using your gasoline or putting kilometres on your car. The ferry also gives you a break from driving.