Driving and Registering a Car

Also, a Driver's Licence is a common document used for identification purposes, for things like picking up a parcel at the Post Office or withdrawing money from the bank.

Most people in PEI travel by car. Here is some information for you if you are a driver yourself.

You can use your valid foreign driver's licence in PEI for 120 days.

If you own a vehicle, you must register it at your local Access PEI office. To register your vehicle you must:

If you bring a vehicle from off the Island, you must register it with PEI authorities within a limited period of time. Contact your local Access PEI office for detailed information about this. [See Related Resources]

The road infrastructure in PEI has been undergoing lots of improvements lately. Bypasses, more efficient intersection solutions, better signalling and other improvements have been implemented, and continue to be added to the road system across the Province in the first decade of the century, and are planned for the future. The road system consists of two major highways and a network of smaller highways and roads. Some secondary country roads are not paved. The highest allowed speed on PEI roads is 90 kilometres per hour, on some highways.

The first 'roundabout' (intersection with a circular flow of traffic) in PEI was built in 2006 at Travellers Rest near Summerside. Many were concerned about this new road feature, thinking it would be 'too complicated for Island drivers'. The next one was constructed in Charlottetown four years later, still with some resistance and concerns from the skeptics, but more are being built as we are writing this Guide. To help Island drivers handle the road novelty, the PEI government published a website page with helpful animations describing rules of driving in a roundabout. [See Related Resources]

Driving conditions change with seasons on PEI roads. In winter, during heavy snowfall, roads may be blocked at times. In summer there is lots of construction on the roads, and traffic may be slowed down or completely blocked at construction zones. It is a good idea to stay informed about the road conditions before going on a long drive. [See Related Resources]

Encountering Emergency Vehicles on the Road

If you are driving and see or hear an emergency vehicle (police vehicle, ambulance, or fire truck) driving with flashing lights and/or sirens, slow down carefully, pull over to the right shoulder of the road and stop until the emergency vehicle has passed.

If you see an emergency vehicle parked at the side of the road with emergency lights on, slow down to half the posted speed limit and safely move to left passing lane (if there is one) or safely pass the vehicle being mindful of oncoming traffic.

If a police vehicle turns on their lights and/or sirens behind your vehicle, signal and pull over safely to the shoulder of the road and stop. Wait in your vehicle while the police officer approaches to speak with you. Do not get out of your vehicle unless asked to do so. Follow the officer's instructions.

Related Topics in this Guide 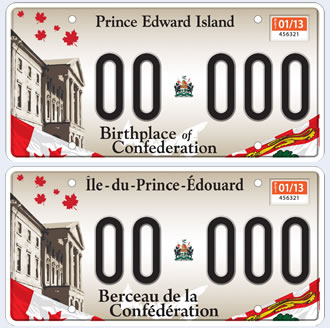 The latest PEI licence plate design was introduced in 2013, to improve road safety and to celebrate Island's role in creation of Canada. The plate is available in English and French.

Related Topics in this Guide

The latest PEI licence plate design was introduced in 2013, to improve road safety and to celebrate Island's role in creation of Canada. The plate is available in English and French.