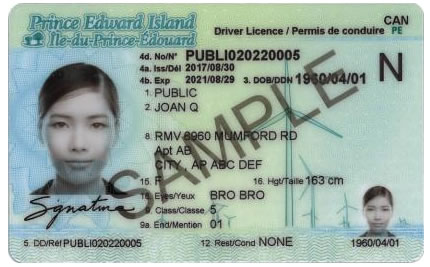 The number of years your PEI Driver's Licence will be valid depends on whether you are a novice or experienced driver. The licence is usually set to expire on your birthday and it can be renewed up to five months before the expiration date.

How to get a PEI Driver's Licence

How you get a PEI Driver's Licence depends on if you:

You may drive in PEI with a valid driver's licence from your home jurisdiction for four months after you become a resident. An International Driver's Permit must accompany a foreign licence if the foreign licence is not in English or French.

If you are a full-time post-secondary student you may drive in PEI with your foreign license as long as it is valid and, if required, accompanied by an International Driver's Permit.

You have to surrender your out-of-country/province driver's licence when you get your PEI Driver's Licence.

If your original driver's licence is from Canada, the United States, Austria, Australia, France, Germany, Japan, South Korea, Switzerland, Taiwan, or the United Kingdom (including Northern Ireland and the Isle of Man) you may get a PEI driver's licence without a written exam and driving test. This only applies to driver licences for passenger vehicles and motorcycles.

With all other foreign drivers' licences, you have to pass a written test on the rules of the road and successfully complete a driving test before getting a PEI driver's licence. See more information on the licensing tests below.

All valid driver's licence holders must pass a vision test, pay the appropriate fees and provide the required documents in person at any Access PEI location. [See Related Resources]

If you are not a permanent resident and are employed in the PEI agricultural or fishing industry under the Government of Canada Guest Worker Program and hold a valid foreign driver's licence equal to the PEI Class 5 and an International Driver's Permit, you may operate a vehicle that requires a Class 5 driver's license in this province for up to eight months in any one year.

Persons with No Previous or Valid Driver's Licence

If you are a beginner driver or do not have a valid driver's licence from another country, you need to go through the three-stage Graduated Driver Licence (GDL) Program. First, you need to apply for an Instruction Driver's Permit, sometimes called a Beginner's Permit.

If you are under 18 years of age, your parents or legal guardians are encouraged to read the pamphlet titled Co-pilot: A Guide for Parents of New Drivers before they sign a consent form.
[See Related Resources]

To apply for your Instruction Driver's Permit you must be 16 years of age or older. You must present all the required documents, pay the fee, and pass a vision test and a written test on the driving rules and safety information.

To receive an Instruction Driver's Permit, you will need:

The Instruction Driver's Permit is valid for two years from the date of issue. With the Permit, you will receive a decal, a bright yellow sticker with a large black letter 'L' in the center, which you must display on the lower righthand side of the windshield any time you are driving.

Once you have your Instruction Driver's Permit, you can take the road test for your PEI Driver's Licence after 365 days. This is reduced to 275 days if you enroll in a certified driver education program.

After you pass the road test, you will get your Class 5 driver's licence and a new identifying decal with a letter 'G' which you must display any time you are driving a vehicle during the next two stages of the program. Each of the remaining two stages lasts a full year.

While you are in the GDL program certain driving restrictions apply for each of the stages, such as who is allowed in your vehicle while you are driving - make sure you understand all the rules. For example, in the first stage (L) you are only allowed to drive under the supervision of a person who has held a valid driver's licence for at least four years and your supervisor must always sit in the front passenger seat while you are driving.

To prepare for a written test on the rules of the road, you must study the PEI Driver's Handbook. It is available online or as a printed booklet at any Access PEI location. When you are ready, contact Access PEI to book an appointment. [See Related Resources]

After you have successfully passed the written test you can schedule a road test with Access PEI.

Driver education programs are courses offered by private driving schools. These programs offer both classroom training and on-the-road practice with an instructor.

If you are enrolled in a certified driver education program, you will write the Instruction Driver's Permit test in class and, at the end of the program, your instructor will conduct a road test and certify you for a Class 5 driver's licence. [See Related Resources]

The Novice Driver Course is a mandatory five-hour educational program administered by Access PEI for all new drivers who have not completed a certified driver education program. [See Related Resources]

The NDCN is a mandatory educational program for newcomers exchanging foreign driver's licences, unless: 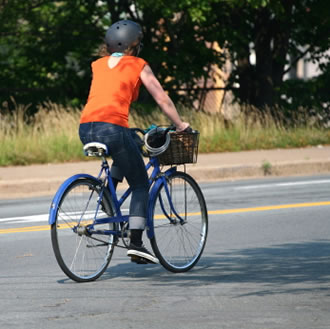 You do not need a driver's licence to ride a bicycle.

You do not need a driver's licence to ride a bicycle.